As we start to emerge from COVID-19 lockdowns in both Canada and the U.S., thoughts are turning to how we effectively reopen our economies and some of the strategies we employ to make it possible. A key thing to note, is that the way in which this is done needs to be smart and efficient.

In the automotive sector, we’ve already been hearing rumblings about the role vehicle scrappage programs might play to stimulate growth again and in the U.S. in particular, there’s been increasing talk of another Car Allowance Rebate System, (Cash for Clunkers type program) to boost new vehicle sales.

Back in 2008-09 when the original C.A.R.S program was instigated in the U.S., it paid upwards of $3000 to consumers for retiring their ride. Dealers loved the idea since it provided an artificial stimulus to new car sales during the Great Recession. The downside was that not much thought was given to disposing of the “clunkers” traded in, so the true environmental benefits were questionable.

At the same time this was happening, the Automotive Recyclers of Canada (ARC) had been working with our federal government on a National Scrappage program which was branded “Retire Your Ride.” Compared to the U.S. program, our approach was more modest and also more thoughtful. A National Code of Practice (CoP) was established for recyclers participating in Retire Your Ride and the idea behind it wasn’t so much creating an economic stimulus as promoting emissions reduction.

Under Retire Your Ride a running, driving, licensed and insured 1995 model year or older vehicle could be traded in for $300 and then sold to or processed by a CoP accredited recycler to ensure it was properly disposed of and the parts harvested from it made available. As a result, it generated a much more favorable response than the C.A.R.S. program in the U.S. which although popular with new car dealers, angered many recyclers because it deprived them of valuable and useful parts to sell and in some respects, took perfectly good, serviceable vehicles out of circulation.

Because in Canada, the amount generated through Retire Your Ride was much less per vehicle—OEMs and dealers wanted the government to do more—citing the $3000-$4000 consumers were getting through C.A.R.S. in the U.S. To its credit, Environment Canada refused, stating that Retire Your Ride was not about selling new cars, but instead, providing an incentive to reduce emissions by offering consumers a cash payout that they could put toward a more fuel-efficient vehicle, cycling or public transit.

What ultimately happened, is that OEMs stepped up and started matching the Retire Your Ride incentives, providing up to $1000 for customers who qualified for the program. When Retire Your Ride officially ended in March 2011, the CoP was renamed the Canadian Auto Recyclers Environmental Code (CAREC) and ARC continued working directly with the OEMs to properly dispose of qualifying older vehicles. The initiative proved to be highly successful, not only for our members but the OEMs and the entire circular economy.

A little more than a decade later and with another recession expected in the months ahead, it perhaps isn’t surprising that scrappage programs are coming to the forefront once again. In Canada, with dealers facing pressure of a glut of used vehicles coming on the market and limited supplies of new vehicles expected over the next several months, the incentive to move metal is greater than it has been for some time, therefore the idea of a scrappage program is very appealing. Yet we should also take this opportunity to look at this from a holistic and environmental perspective.

Since 2008, we have seen growing collaboration among environmental groups and the creation of networks such as the Canada Cleantech Alliance. Like dealers, they agree with incentives to retire older vehicles and purchase newer ones; but believe that these incentives should be directly targeted to the purchase of electrified vehicles and developing the charging infrastructure to support them.

From our perspective at ARC, we see significant value in discussing the support of such an initiative, not only from the legacy of Retire Your Ride, but the fact that under CAREC, the infrastructure to support a similar program is still in place, including the database and network of more than 350 accredited recyclers across Canada. Additionally, ARC has and continues to work with Plug N’ Drive in Ontario to provide incentives for consumers to purchase a used EV as well as helping develop training and guidelines to help accredited recyclers properly dispose of retired hybrids and electric vehicles, so there are green aspects in place today that weren’t available a decade ago.

Although scrappage programs do have the potential to cause more harm than good (they can damage the automotive eco-system by denying people affordable, personal transportation and reducing the circulation of and demand for used parts, which in turn impacts the cost and frequency of repairs and ultimately makes vehicle ownership accessible to fewer people), they can, if done responsibly and collaboratively through a network of accredited recyclers, promote clean air, provide funds for people who need them as well as bolstering the circular economy—something that Retire Your Ride has already and clearly demonstrated. 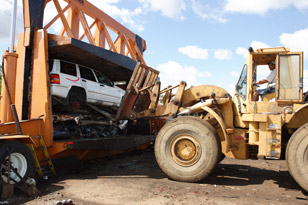